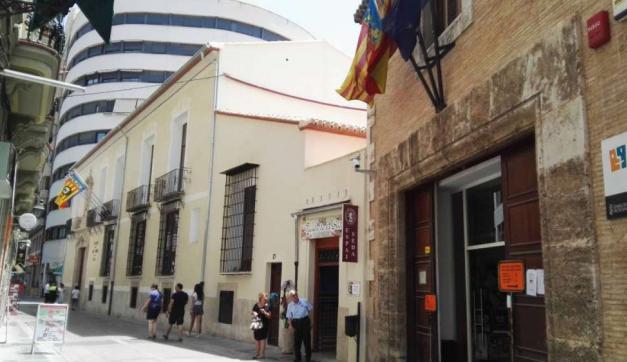 The Velluters neighbourhood owes its name to the principal occupation of its residents: the silk trade (velluter in Valencian), and the high concentration of silk looms located in it.

During the 15th and 16th centuries, this industry developed in the city at the same time that the neighbourhood formed and adapted to the needs of silk. The industrial activity was carried out in workshop houses such as the Tamarit Palace.

The most common ones were the small workshops located in what is known as “porxe del velluter”, on the last floor formed by wooden beams. It is a room with windows finished with straight lintels or semicircular arches. These characteristics are still visible in some buildings. These lofts were used as the thatched beds where the silkworms were reared.

In the neighbourhood is the College of High Silk Art, which, since 2016, has become a museum. The College originated from the need to unify the criteria for the production of silk. This is how the “Gremi de Velluters” was created, the body that regulated silk weavers as well as the quality of the Valencian fabrics that were produced.

We also found the house of the guild of master carpenters who were in charge of the workplaces and silk workshops built mostly from wood.

In addition, in the Velluters neighbourhood you can attend the festival known as La Foguera del Motí dels Velluters which is celebrated on the last weekend of January in the Plaza del Pilar. This festival commemorates the revolt led by silk workers as well as the spinners’ strike.