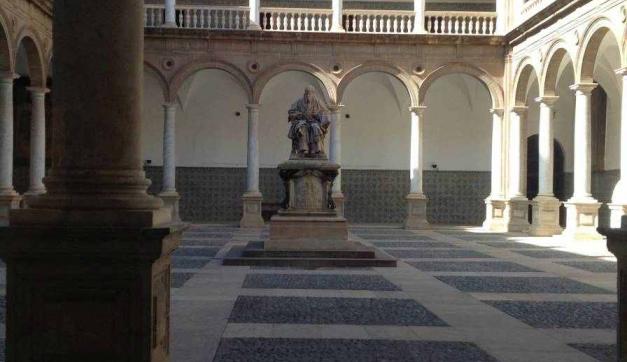 The creation of the Seminary College of Corpus Christi is directly related to the great effort of renewal and reform of the Catholic Church driven forward by the celebration of the very important Council of Trent. Once Juan de Ribera was appointed archbishop of Valencia, he applied himself to promoting the new conciliar provisions, which were not accepted by all, on the bases established with great effort, by his predecessor, the holy Archbishop Tomás de Villanueva.

The main mission of this Royal College, known among Valencians as the Patriarch’s College, was to train priests according to the spirit and provisions of the Council of Trent. The collection of the College’s buildings was constructed between 1586 and 1604 by a team of masons and stonemasons led by auxiliary bishop Miguel de Espinosa, who contracted the most important parts, the cloister and chapel, to the famous stonemason Guillem del Rey. The notable construction that resulted, due to its modernity and avant-garde nature, created an extraordinary interest both in relation to what was being built in Valencia at the time and the architecture of the Renaissance in Spain, where it shows full assimilation of the Italian novelties disseminated by architectural treaties.

The vast collection of works of art contains a significant number of pieces of religious clothing and liturgical ornaments ranging from the 14th century to the present day. These pieces of a religious nature are examples, in many cases, of Valencian silk production using all its techniques. Moreover, it also houses very important pictorial works that reflect silk clothing, as well as sculpture, carvings, frescoes and tapestries. It is necessary to highlight the archive of notarial protocols consisting of 29,064 protocols from the 14th to the 19th century.

The College of Patriarch San Juan de Ribera was declared a National Historic Artistic Monument in 1962 and an Asset of Cultural Interest in 2007.