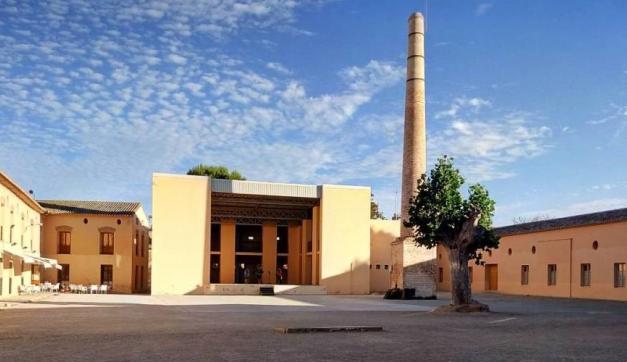 The Vinalesa factory was the greatest attempt to modernise and improve the methods used for the spinning and twisting of silk in 18th century Valencia. Its construction resulted from the privilege granted in 1769 to the French technician Guillermo Reboull, in order to apply in it the most innovative methods that Jacques Vaucanson had introduced in France. The initiative was financed by Josep Lapayese, a French merchant established in Valencia, who finally assumed the management of the company. In the factory, 30 double spinning lathes were installed, at which 120 women worked. But the most mechanised area consisted of the 44 machines for winding, bending and twisting the silk, which were driven by a large hydraulic wheel powered by the current of the Moncada canal. The factory was completed in 1779, and required an investment of 2.5 million vellon reals. The description of the company, along with the defence of the advantages of the new methods of spinning and twisting, was carried out by Josep Lapayese himself in the Treaty of the art of spinning, winding, bending and twisting the silks in accordance with the method of Mr. Vaucanson, with some additions and corrections to it. Beginnings and progress of the Vinalesa factory, in the Kingdom of Valencia, established under the protection of S.M., published in Madrid in 1779.

Although theoretically it was possible to spin around 40,000 pounds of silk per year, everything seems to indicate that this level of production was never achieved. The high investment made, along with the financial difficulties of travel between the 18th and 19th centuries, led to the factory frequently suffering the cessation of its activity, and the property was transferred on several occasions. In the 1840s it was purchased by Tomás Trenor, who converted it to produce esparto and jute. In 1983, the City Council of Vinalesa acquired the building, which currently houses various municipal services.