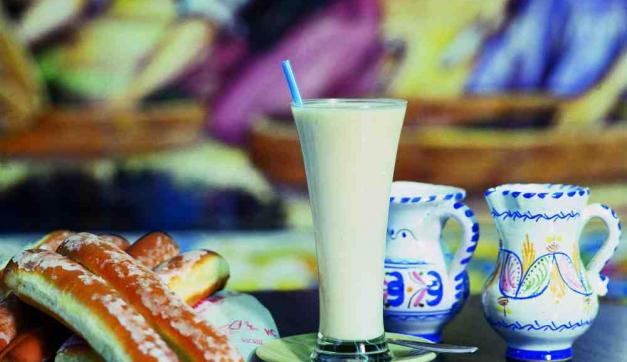 The “Silk Road” refers to a network of trade routes that are linked to the marketing of silk from China. Although silk is considered the most important product of the route, many goods were exchanged on it.

Tiger nut cultivation reached the Iberian Peninsula in the 7th century, when the Muslim conquest began. This food is currently grown in sixteen villages of L’Horta in the Valencian region, the only area of Spain where this tuber is grown. In this region there are currently some 5.3 million kilos of dried tiger nut, of which 90% is protected by the designation of origin.

The drink known as horchata (tiger nut milk) is made with tiger nuts. The sweet known as fartons is associated with this drink.

We can visit the horchata and tiger nut museum in the Alqueria el Magistre in the town of Alboraya. By visiting the museum, we can understand the tradition associated with the preparation of horchata, how tiger nuts are cultivated, how they are currently marketed and how they used to be prepared. We can also visit several rooms such as the hermitage, kitchens, the very old salons, the old tower of Arab origin... and we can see old objects related to Valencian agriculture. The visit to the museum includes horchata and farton tasting. The Horchata Route guide prepared by the City Council of Alboraya along with horcata cafes and the Chufa Valencia Designation of Origin can also be consulted.