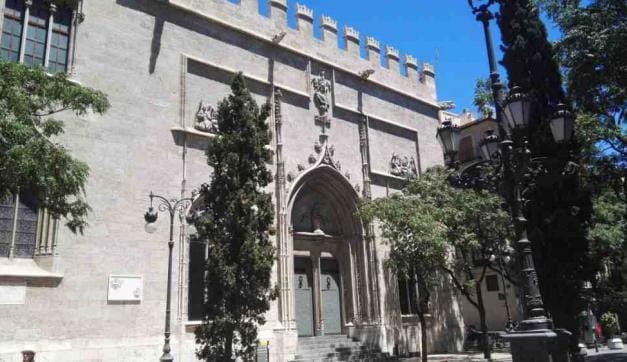 The Silk Market is the most notable gothic-style building in the city of Valencia. It is located in its historic centre. Building work started on it in 1483 by Pere Compte and Joan Ibarra, at the initiative of the municipality.

It was built as a Merchants Market in the 15th century, conceived as a place for commercial exchange of different merchandise, including silk. From the 18th century it began to be known as the Lonja de la Seda given that silk was the predominant and the most valuable product to the Valencian economy. In 1996, it was declared a World Heritage Site by UNESCO, becoming the first monument mainly associated with silk-making to gain this recognition.

The Market consists of three main parts that can be visited: the Columnary Hall or the Trading Room and the Consulate of the Sea, arranged around the Patio of Orange Trees.

The Trading Room is a magnificent space, with eight slender columns of helical shafts, which open like palm trees to form fifteen groined vaults, 17.40 metres high, which cover the entire interior space. In this room, dedicated to commercial transactions, the “Taula de Canvis”, the first banking institution of the municipality, created in 1407, was established.

The Fortified Tower has three floors, the lower one was dedicated to the chapel and the upper ones were occasionally used as a prison for bankrupt merchants. They are accessed by a spiral staircase created without a central axis. From there you can see the Patio of Orange Trees.

The pavilion of the Consulate of the Sea, from the start of the 16th century, denotes a marked Renaissance character in the lodge and in the medallions of its finish. This institution was created to ensure compliance with maritime legal-mercantile regulations. It was also known as the Consulate’s pavilion where you can visit the room dedicated to the Commercial Court or the Chamber of the Consulate which are notable for their wooden ceilings and the tiles of their floors. On the upper floor we can observe the beautiful alfarje wooden ceilings from the former 14th century City House.