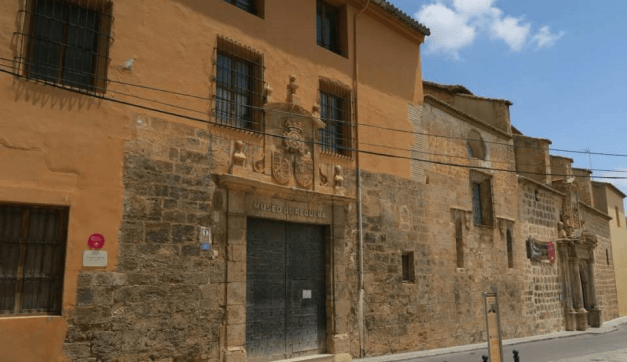 Requena Municipal Museum is located in the former Royal Convent of Carmen. The foundation of this convent at the end of the 13th century was due to the Infant Alfonso de la Cerda, grandson of Alfonso X of Castile and Louis IX of France, and it is the oldest of the Carmelite Order in all of Castile. The baroque cloister is notable in its architecture.

In 1842 the City Council was granted the use of the convent building while the church remained open to worship. Part of the convent was prepared as a Town Hall and its premises have been home to the Party Court, the Municipal Archive, the Public Library and the current Municipal Museum. The Municipal Museum of Requena was founded in 1968. At the start, it was established in the Homage Tower and in 1975 it moved to its current premises.

The collection in this museum related to the silk history and heritage of the town and its region is certainly not negligible. The collection “Traditional clothing in the Campo de Requena-Utiel. 1789-1914” is notable. It is a look of the evolution of local clothing during the 19th century, which includes pieces of silk as part of different models of clothing. There are also individual pieces of great value such as taffetas, damasks and velvets, as well as some fabrics from the last operational factory in Requena: García de Leonardo. The ethnological section conserves some instruments and tools that illustrate the process of creating these fabrics.

The most valuable piece of silk treasured by the Municipal Museum of Requena is, without a doubt, the standard or pennon created on the occasion of the proclamation of King Ferdinand VI (brandished for the first time on 2 October 1746) and which displays the coat of arms of the royal weapons and of the town.

There is also a wood carving of Saint Jerome, the patron saint of the silk weavers, known as “of the butlers” because it was the image that circulated through the noble houses of the town and that therefore transported the butlers from one house to another. In relation to the guild, in the Municipal Museum of Requena we can see a copy of the statutes of the College of High Silk Art, since the whereabouts of the originals are unknown and it is not even known if they have survived to the present day.