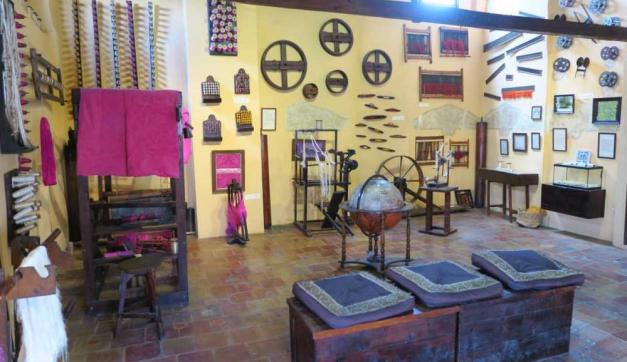 The Requena House-Museum of Silk is located at the former centre of the College of High Silk Art of this town and is the most significant witness of the silk history of Requena. The splendour of its silk trade resulted in the foundation of its College of High Silk Art in 1725, which was constituted as an institution independent from its equivalents in Valencia or Toledo. Requena, with an approximate 600 looms, became one of the main silk production centres in all of Spain.

The building is located in an authentic Muslim parapet walk or cul-de-sac within the walled precinct of the city, in the old calle del Pozo. Its age is not known but it is known that in 1740 it was bought by the Silk Weavers Association from a private individual for administrative purposes, and thus became the headquarters of such an important guild corporation.

The raw material was brought mainly from Valencia, la Ribera and areas of Albacete. In Requena it was manufactured and then distributed through the ports of Valencia, Seville and Cádiz. A large amount of the Requena fabrics were exported to the Americas. With the silk crisis, the house returned to the hands of individuals and over time changed ownership many times. Even so, and despite the passing of centuries, it still maintains its original structure.

The former guild headquarters were restored 10 years ago, respecting its most important architectural elements. The interior is divided between the recreation of a traditional Requena house and the exhibition of different elements rescued from the last silk factory in the region (García de Leonardo), such as a loom.

The mosaic of the façade dedicated to Saint Jerome, patron saint of the silk weavers, is very notable. Made from tiles, probably in Manises (Valencia), it served to enhance and distinguish the house in the 18th century. It has pastel colours and simple shapes and Saint Jerome presides over the scene. We must not forget the lion that he removed a thorn from and the skull, a sign of our human condition.