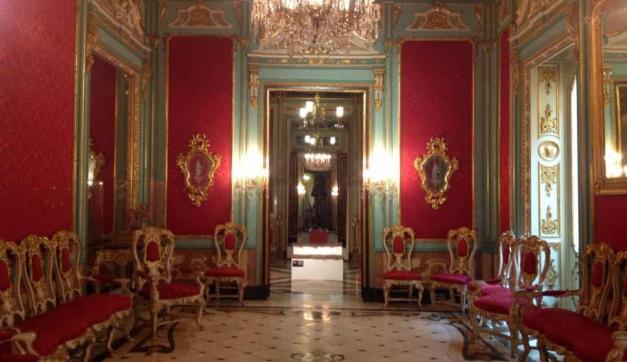 The “González Martí” National Museum of Ceramics and Sumptuary Arts is found in the Marqués de Dos Aguas Palace, and is the result of a refurbishment carried out in 1740. In 1941 the Palace was declared a Historic-Artistic Monument and in 1949 it was acquired by the Ministry of Education to house a major ceramics collection by Don Manuel González Martí and his wife Doña Amelia Cuñat.

Inside we can see 18th century carriages, such as, for example, the Carriage of the Marquis of Llanera, which has curtains and cabins that are made of natural silk in a greenish tone, embroidered with silver sequins. We can also visit the 19th century function rooms with their original decoration, where we can find furniture and upholstery in silk. We also find rooms with upholstered walls that follow the old silk designs.

The second floor of the building is dedicated to the González Martí National Museum of Ceramics, with a large collection of pieces from ancient times to the most modern designs. The medieval pieces of Paterna or Manises, the set of Valencian medieval tiles and the “socarrats” set are notable.

There is a certain parallelism between the ceramic designs and the silk textile designs since the decorative motifs of silk fabrics were adapted in ceramics. For example, Feliu (2005) indicates that many students of the Academy of Fine Arts of Saint Charles of Valencia worked at the same time as ceramists and designers of silk fabrics. This author defends the importance of this academy, which took the designs of Valencian silk and experimented with them and applied them to ceramics.

In addition to the ceramics collection, in the museum we can visit the painting and engraving collections and the textiles and clothing collection. In the latter we can observe a range of women’s clothing, much of it made from silk.

The museum’s library specialises in scientific publications on ceramics and decorative arts and it also has significant collections of art in general, ex libris, history and archaeology. It has over 25000 volumes and 110 titles of periodicals.