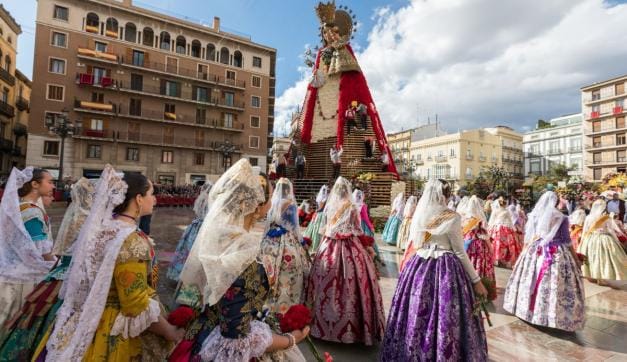 The Falles is a festival with a tradition rooted in the city of Valencia and different populations of the Region of Valencia. This festival has become a very important tourist attraction, since, in addition to being classified as a festival of International Tourist Interest, in November 2016 UNESCO entered it in its Representative List of the Intangible Cultural Heritage of Humanity.

The origin of the Falles was the guild of carpenters who, on the eve of the day of their patron saint, Saint Joseph, burned wood chips and old junk in bonfires. In Valencia, this guild was located in Velluters district, a neighbourhood that owes its name to the main trade of its residents, the silk trade. The carpenters were responsible for the workplaces and silk workshops built mostly in wood.

Currently, the Falles are celebrated between 15 and 19 March. On the 15th the Falles monument (the plantà) is planted and on the 19th the Falles ends with the burning (la cremà). These monuments called falles are several metres high and made from different materials (cardboard, polyurethane, wood, etc). Their message is generally critical and satirical, dealing with current issues.

Among the acts, the Offering of Flowers to the Virgin of the Helpless is notable, in which festival-goers come dressed in Valencian regional attire. Since the 16th century, some elements of Valencian regional costumes, inspired by the clothing of farmers, have been made from silk: skirts, fans, corsets, aprons, headscarves, etc. for women and shirts, stockings, sashes, waistcoats, smocks, etc. for men.

The Valencian silk-making industry has been linked to the creation of this clothing. This continues in the present day since silk is in strong demand thanks to Falles clothing. Silk remains a valued product within some sectors linked to the Falles, which makes the factories that produce this clothing, and the shops that sell it, prosperous. All this allows the art of silk hand-weaving to stay alive.

In Valencia you can visit the Falles Museum, which houses a collection of ninots indultats (dolls saved from the fire) and posters and photographs of Falles themes.

The Museu Faller in Gandía displays the Falles festival in general and specifically in Gandia. They also have regional costumes on display and show craftsmanship linked to the manufacture of Falles fabrics, including the artisan manufacture of silk.