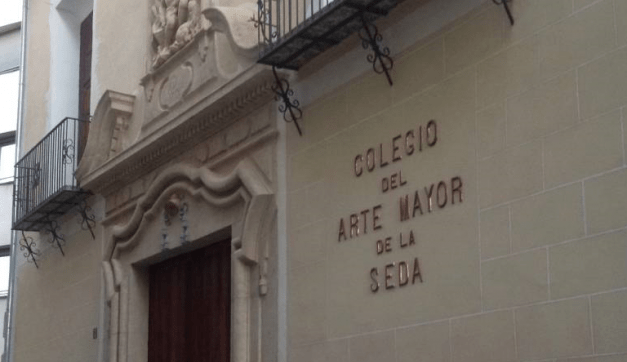 The College of High Silk Art is located in a building acquired by the Gremi de Velluters in 1494. This guild corporation, which brought together the velvet weavers of the city of Valencia, was constituted on 16 February 1479. It soon would become the most important guild corporation in the city and its members played a very prominent role in the revolt of the Brotherhoods.

After the decline of the 17th century, in the last third of the century it began to become active again. As a result, the guild received the privilege of being made into the College of High Silk Art in 1686 by King Charles II.

The building underwent an intense expansion and refurbishment in the mid-18th century, at which time the Hall of Fame was built. This is the Board Room in which the leaders in the corporation met and it constitutes the main room of the school. The decoration of this room represents a microcosm consisting of the celestial part, with a fresco on the ceiling of Saint Jerome, patron saint of the guild, created by José Vergara, and the earthly part of the floor. The latter is made with Valencian ceramics and represents the four continents known at that time.

It also has a historical 15th century document archive (ordinances, minute books, books of teachers, officials and apprentices, books of administration and inspection of factories and businesses, etc.) of the former guild and, subsequently, school. The document archive is the most important guild archive in Europe. It consists of 48 parchments, 660 books and 97 archive boxes. Almost all documents refer to the Velluters Guild. At present, access to the archive is not open to the public.

In the shop Espai Seda, you can buy exclusive items handcrafted by the associates of the College, some of them with silk fabrics.

It has recently been refurbished and turned into a museum that has just opened (June 2016).