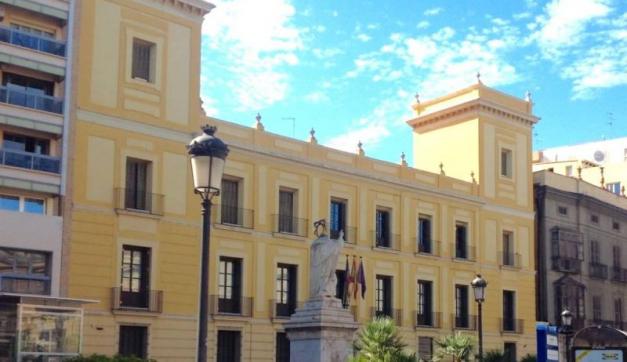 Opposite the Convent of Saint Dominic, forming part of the historic Plaza de Tetuán, is the palace of the counts of Cervelló, a building of singular importance in the contemporary history of the city, since it was the residence of monarchs and illustrious individuals during the 19th century. Marshall Suchet stayed there during the invasion of the city and it was here that Ferdinand VII abolished the constitution of Cádiz of 1812 and restored absolutism. The Queen Regents María Cristina and Isabella II also stayed in the palace on various occasions.

The building was built in the 18th century by the Counts of Cervelló. At present, only the façade retains its original appearance, in the neoclassical style, flanked by two towers and two floors of balconies. The building was recently restored, returning the palatial atmosphere to the halls of the noble floor, in which the “Bourbon Gallery” is notable.

On the second floor the palace houses the Municipal Historical Archive, created in 1238, one of the oldest, most complete and best preserved in Europe, and the Serrano Morales Municipal Library.

The ground floor of the building has been fitted out as a museum with exhibitions. The first, The Cervelló Palace, home to illustrious figures during the 19th century, shows intimately and with a certain 19th century aesthetic, the historical changes that occurred in the palace. Here we can see the reproduction of Galvién’s painting entitled “Kissing of the Hand of Isabella II in the Cervelló Palace in the year 1858” (oil on canvas from the mid-19th century) on the occasion of the presentation of Ferdinand VII. In the painting, we can observe Valencian women with typical costumes and baskets with skeins of silk. In the second one, The Treasure of Memory, a part of the rich collection of the Municipal Archive is exhibited.

Some of the rooms of the palace are coated in fireproof fabric made by Garín that reproduce the old designs of silk fabrics. We can also visit the 19th century function rooms with their original decoration where we can find furniture and upholstery in silk.