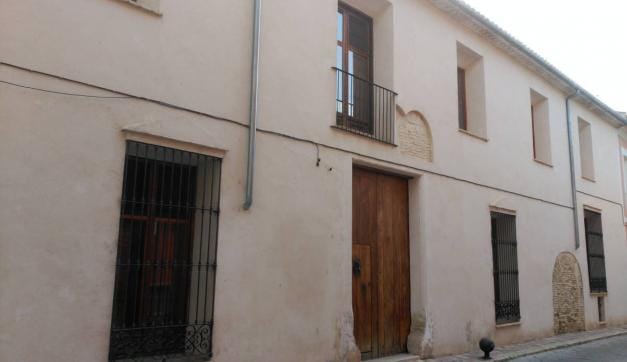 The 18th century Casa del Bou in Albalat de la Ribera is the oldest private house in the town. It owes its name to the head of a bull that presides over the main entrance inside. The building is notable not only for its historical value (it is one of the few stately homes preserved in the town) but also for its architectural and technical value: it is a compact rural house with floors parallel to the façade and a transverse axis centred in the floor. Much of its importance lies in the structural unit that it maintains and that makes it possible to read each of the elements that shape its ordering and distribution, both internal and external. The dwelling was located on the ground floor, as well as a yard for keeping the animals, while the upper floors were used as storage and for other activities that supported the family economy.

In this regard, we should note the layout and structure of the upper floor, intended for silkworm rearing (something very common in the region), and the preservation of wooden swaths and thatched beds prepared for these purposes. In the recent restoration of the Casa del Bou they maintained these elements that speak to us of the silk-making past of the town and that constitute one of the best-preserved examples of a set of “beds” arranged in their original location. In general, the upper floor of the Casa del Bou can be seen as a small section of traditional silk-making in the Valencian countryside.

The mural decoration of all the rooms has also been restored, as well as a large number of period wooden furniture conserved in the town. The whole set transports the visitor to an era, the 18th century, characterised by the Ribera leadership in the silk sector.